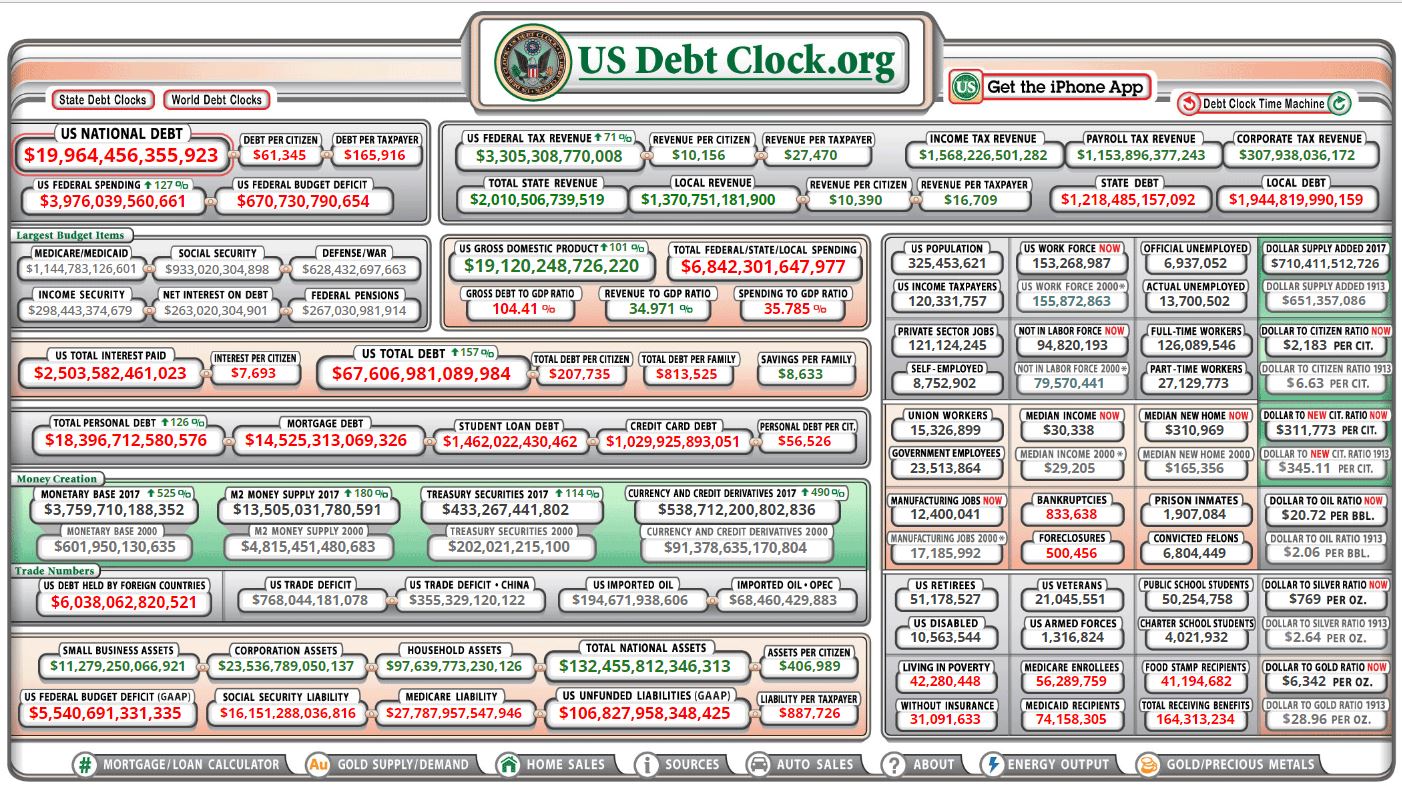 Fake news is not just confined to politics, this ‘debt clock’ is the monetary version of fake news, and just like any fake news, this ‘debt clock’ (usdebtclock.org) is pushing a narrative. Fake news is not a recent thing, it is everywhere, about everything, so the trick is to stand back from the picture, tune out the noise, and do your own research, do your own journalism, just like the real news used to do (Not a newsflash: the real news waved bye bye to journalistic integrity decades ago).

I noticed a recent posting on the popular Intro To Modern Monetary Theory (MMT) website on Facebook, with yet another worrisome query regarding the ‘debt clock’. What concerned this person (questioning the validity of MMT), was outstanding ‘total societal debt’. In particular, was the clock reading of ‘money’ (‘M2 Money Supply’) being outnumbered by ‘debt’ (‘US Total Debt’) by a factor of 5. “That would suggest that we,” the post said, “as a society, operate from a position of insolvency.”

Let’s take a closer look at the ‘debt clock’. The first number that meets the eye is the ‘US NATIONAL DEBT’ of $19.9T on the top left. It’s wrong. Since 1971 (since the switch from gold backed dollars to pure fiat dollars was completed and made official) there is no ‘US National Debt’. There was a federal gov’t debt before the switch (because the federal gov’t could not issue gold-backed dollars out of thin air) but there is no debt after the switch (because the federal gov’t can now issue fiat dollars out of thin air). Today, in the post gold standard, modern monetary system, there is no such thing as the issuer of a pure fiat currency (any monetary sovereign nation using a non-convertible, free-floating currency) ever being in debt of that currency. The federal gov’t, the issuer of dollars, doesn’t need to ‘borrow’ its own dollars. Selling federal ‘debt’ is no longer needed as a financing operation. Rather than being needed to fund spending using gold-backed dollars, US federal gov’t Treasury bond sales, now denominated in fiat dollars, perform other vital functions (upholding demand for dollars, fulfilling savings desires, maintaining price stability, and defending the overnight interest rate target). So either the ‘US National Debt’ figure is wrong (s/b $0.00), OR, the word ‘debt’ s/b changed. Why? The federal gov’t is the sole issuer of fiat dollars. Those US Treasury bonds that make up the ‘US National Debt’ are obligations, yes (they are backed by the full faith and credit of the federal gov’t); they are liabilities, sure (the federal gov’t promises to pay semi-annual interest and pay back the principal at maturity); but a “debt”, no. For example, IBM has liabilities to pay dividends on all outstanding shares of IBM stock, yes; IBM has an obligation to honor the equity ownership to those IBM shareholders, sure; but those IBM shares are not a “debt” to IBM, the sole issuer of IBM stock. Ask any accountant and they will confirm that all debts are liabilities / obligations but not all liabilities / obligations are debts. The way to look at federal gov’t “debt”, the reality, is that those Treasury bonds, just like IBM shares, are investment holdings, they are savings, of the private sector. So on the ‘debt clock’, the ‘US National Debt’ figure is wrong, or the wording is wrong (s/b US National Savings).

Moreover, the ‘M2 MONEY SUPPLY’ figure ($13.5T) on the ‘debt clock’ needs to be changed. The federal gov’t breaks down ‘money’ into several classifications (monetary base, M1, M2, etc.) for the same reason that they break down employment numbers (U1, U2, U3, etc.). The federal gov’t does this because only one of these headline figures of ‘money’ or ‘employment’ has a significant effect on movements in the economy (economic indicators), so they just need to be watched more closely (NOT that the others are NOT ‘money’ or NOT ‘employment’). For a better read on the money supply figure on the ‘debt clock’, better to include those US Treasury bonds. Warren Mosler, the father of MMT, argues (correctly) that US Treasury securities ‘held by the public’ ($16T) should be included as part of the money supply because like dollars in our checking, savings, and retirement accounts held at banks (the ‘M2 Money Supply’ figure on the ‘debt clock’), those bonds are also our savings at the Treasury via the Federal Reserve Bank.

Finally, the most eye-popping ‘red ink’ on the ‘debt clock’, the ‘US UNFUNDED LIABILITIES’ ($106T), is another deception. ‘Unfunded’ is not as sinister as it is intended to sound. ‘Unfunded’ only means that these liabilities are ‘pending’, that they haven’t been funded because they simply haven’t come due yet (not that they are ‘overdue’ or that the federal gov’t can’t pay them). For example, a young worker’s withholdings to Social Security (off-budget) is not ‘saved’ in a ‘lockbox’ for the future. The federal gov’t automatically credits that amount towards today’s federal gov’t (on-budget) expenditures. The way the federal gov’t records that after-the-fact ledger entry and to also counter-post a future Social Security check that worker will receive as a result of the contribution at retirement age is called ‘unfunded liabilities’. ‘Unfunded liabilities’, a.k.a. ‘Intra-gov’t debt’, is merely the accounting construct that reconciles today’s receipts vs. tomorrow’s payments (nothing at all to worry about). There is absolutely no problem for the federal gov’t to pay any ‘unfunded liabilities’ in dollars. The federal gov’t, the issuer of dollars, will not run out of dollars. You, however, will run out of time on earth (finite resource) swapping it for those dollars (infinite resource) and the federal gov’t will do that trade all.day.long.

The key to making fake news believable, to give the scripted narrative some legs, is to make sure that you mix in enough real news, at least 40% (“I have the feeling about 60% of what you say is crap.” David Letterman to Bill O’Reilly 01/04/06). Aside from the figures I mentioned above, the rest of the figures in the ‘debt clock’, like ‘STATE DEBT’ and ‘LOCAL DEBT’, are legit. For example, because they are in the same boat as you & I, all US local & state gov’t debt is real debt (unlike the federal gov’t, the rest of us are all users of dollars, not issuers of dollars). Again, despite those figures adding up ominously on the ‘debt clock’, there is nothing to worry about. For all that debt of the 50 US state governments combined, the median debt-to-GDP ratio is an easily-serviceable 2.4%.

(Keep this in mind the next time you hear the alarm from that ‘debt clock’).