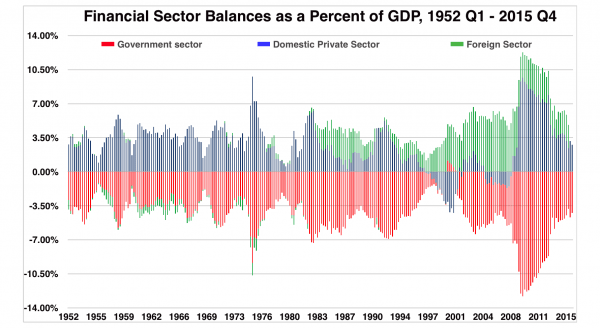 Refresher, there are four sectoral balances, not three.

Why does MMT prefer to keep three SB? To distract followers and keep them far away for profit! Why is profit death to MMT? Because it exposes the accounting IDENTITY that deficits = savings for the top 5%. Not the 95%.
Why? Because no profit can ever exist unless the household DISSAVES! BY accounting IDENTITY! it cannot be any other way.

MMT will be the first to tell you that a surplus of one sector requires a deficit from the other sector. Thus the only way for the businesses sector to run a surplus (profit/savings) if if the household sector runs a deficit (income/DISSAVINGS). This is not an opinion or vague hunches and feelings. This is a self-evident mathematical fact. If MMT says it is good for three sectoral balances than it is good for the four complete sectoral balances. Can’t have it both ways.

This is extremely important to understand because WHO funds the household matters greatly. Gov’t, rest of world or business sectoral balances. The ideal funder of households is Business sector. Because PROFIT is recycled between households and Buniesses leaving a residual net productive wealth for the economy making the pie bigger for all. Thus GDP will always rise faster than DEBT under the ecosystem feedback loop. Even if some public, private debt or rested world (exports) are used, the net result will always be positive GDP growth rate relative to Debt leading to net wealth creation, not debt.

If you step back, you will notice a subtle yet distinct & extremely important difference just took place between the MMT and real-world version of sectoral balances.

MMT’s 3 sectoral balances push a native that Gov’t printing is the center of the economic universe and the path to prosperity.

While real-world version 4 sectoral balances place the household/business relationship (the 100%) at the center of the economic universe and the path to prosperity.

Blaming Gov’t surpluses during the Clinton years is false. For the following reasons. The Govt Bond creation (spending) to the private sector never contracted. In fact, bonds expanded during that period. Meaning available bonds (borrowing to spend) increased. Thus the dollars were never destroyed or paid off. Which is THE ONLY WAY TO DESTROY DOLLARS. The opposite of a dollar creation. This insight was discovered by Edward Delzio. The last time bonds in the US that were paid of and dollar destruction took place was in 1957. So to blame Gov’t a self-evident the DOT COM bubble where people poured their life savings into companies that had no earnings by their own free will who later got crushed and stopped spending is a monumental absurdity. But it sure fits nice and neat for the MMT marketing. You see not all surpluses are the same. Acquiring a surplus in year one only to spend it in year two is not the same thing as acquiring a surplus to pay back bondholders and reducing the number of dollars in existence that can no longer be spent and taxed back. So to say Govt surpluses suffocated the private sector that caused a recession is an economic joke. Especially when those dollars spent back into the economy in year 2. Dates to economics mean nothing. Just cause we humans place a value on dates doesn’t mean it matters to economics. So to say Clinton surpluses caused a recession is to say #deficits will never cause a recession. Except for the fact that every recession in the last 4 out of 5 did indeed have running deficits ongoing. Like I said great for marketing bad economics.

Which brings us to another ridiculous claim by MMT. That taxes value a currency. Not human labor and creation. There are many nations in the middle east that do not tax. By MMTs logic those nations’ currency should be worthless. Except for that fact they are not! You see that MMT meme that a currency comes first there for it is assumed that the engraving of a digit automatically comes with value is false.

You see Gov’t cannot print value for a currency, thus it cannot pay for IT & IT & IT and all the ITS! Only the household/business sectors can create wealth that can value a currency. The Gov’t engraving or keystroking $ the medium of exchange that only represents value in point of time. This is vital for people to understand, bc the MMT claim is that the act of engraving, print, keystroking is the value and comes first. Wrong backward. MMT marketing is predicated that the cart is always ahead of the horse in just about everything they market.

Here are some examples

Imports are a benefits exports are a cost. Imports export dollars and those dollars’ velocity of money throughout the economy takes place externally not internally. Thus the $ income speeding times 5 before ending up as savings to purchase US bonds ends up to a foreign entity. Those bonds are ownership of a nation. Just like the corporate bond is an ownership of a company. Those bonds are entitled to interest savings to eternity while goods revived have a short lifespan. The jobs created overseas result in a bigger economy while the job loss to families is catastrophic to the importers economy since income spending velocity times 5 is wiped out. Not to mention the interest payments the importer will have to pay from its future productivity is eternal. How is that a benefit? It’s not!

Next, Gov’t doesn’t borrow from the private sector. Yet again cart ahead of the horse. The claim is that the act of if the middlemen buying are the customers, meaning the primary dealers buy bonds with money they just created out of thin air every time a deficit is created is yet again more MMT marketing and bad economics. If that claim were true. Warren Buffet, foreign central banks, hedge funds, pension funds, companies, you me would never own a bond. But that is not economic reality. It is all our savings that create reserves that we directly or indirectly buy the bonds. We are the ultimate holders of bonds the end-user customers who Govt borrows from. Not the middleman, primary banks.

Contrary to belief Gov’t does not just print up money and spends. It is illegal to do so. Gov’t deficit spends by creating bonds, not $s. Those bonds are bid on by primary dealers, who sell them to secondary dealers for a profit that ultimately ends up with the customers mostly top 5% who own them in exchange for their $ savings. Those dollars recycle back to households, businesses and everyone else only to repeat the processes once again leading to a bond expansion, not dollar engraved, digit expansion.

It was not until the most recent tool QE introduced by central banks that now convert and liquify Bonds back to cash, reserves in the banking system. QE can only buy bonds that are owned by the final owners in the free open market prices. For example, if Buffet bought a bond at $100 + coupon of say $2 ($102) and the free market now prices that same bond at $104. Then the Central bank will pay $104 thereby expanding the money supply by an additional $2. Thereby reducing the bonds available and increasing the cash/reserves available that are now free to flow to any other asset class such as stocks.

So the MMT path to prosperity is to increase deficits (bond expansion) from $1 trillion to $2 3 4 $5 trillion have the Govt fund the private sector with unproductive activities such as Job guarantee (workfare) where no one can be fired, that will create a moral hazard, hook people to Gov’t, create the biggest bureaucracy known to man and along with that corruption, while suppressing the private sector wages just above workfare wages. Those dollars will flow through the household profit business savings that will fund the next deficit, blowing out more and more bond savings with the same $a for the top 5% and the FED will continue to run QE converting bonds back to cash/reserves that will blow out bonds stocks commodity real estate massive asset price inflation. While the household becomes less and less productive in a deflationary spiral which leads to GDP/DEBT collapsing until such time that debt to national wealth approaches 100% and the SNAP moment occurs and the entire economy collapses when the top 5% no longer wants the bonds that no longer offer any national wealth. Just like no bondholder wants to own a bond when a company is insolvent and everyone starts to sell.

This leaves us with the true mathematical truth that deficits are assets for the top 5% and liabilities for the 95% who see on the hook to the 5% to pay the bondholders. Domestic or not it makes no difference. They want their money and if the 95% can’t pay, they will sell the bonds Argentina style and spike interest rates to the moon on an astronomical amount of public debt which will be impossible to pay the interest on.

This is the path of “prosperity” MMT Marketing wants to follow that will really lead us all to economic ruins.

Lastly, think about this. If MMT worked as marketed why are they not in some 3rd world nation like Angola, Haiti, Venezuela implementing their plan? Raise taxes print value for their currency, let Angola central bank set rates to zero and run QE, increase deficits to 25% of GDP, create Job Guarantee to keep humans in silos for the private sector, implement a Green new deal, free healthcare, free college and show the world how well the not so Modern Monetary Theory works!

I’ll tell you why, because it is economic GARBAGE! It doesn’t work like that! MMT can only make millionaires out of trillionaires! That’s why they are pushing this voodoo economics only in developed wealthy mature economies. Bc they have to show that it works for some time by liquifying and looting that nation’s wealth in the background till the SNAP moment occurs and it’s too late for anyone to do anything about. Like a shopaholic borrowing till the minimum payments can no longer be met and they are on the street in garbage cans looking for food.