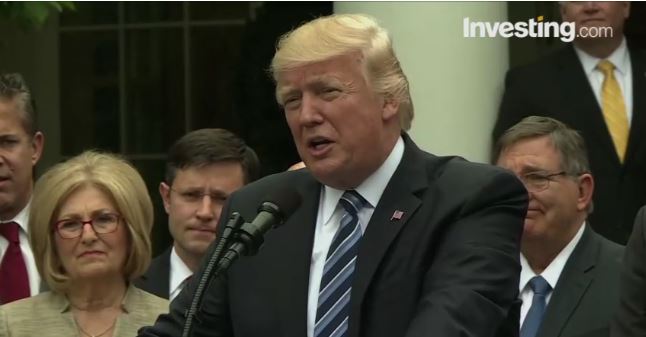 I don’t usually don’t post News other than to make fun of them or to tell you I told you the Orange Boy is a disaster and will run the US as a profitable company. This time it is different. While nothing has been set in stone and we are months away from knowing what the final version will be. I believe the Markets will start to price in some sort of deficit reduction, 2% 1% doesn’t matter. Deficit cut is a cut. Not good when you are riding Markets at all time new highs fully invested with leverage on top of that. So I expect markets to at least go sideways to a slow decline till then. Dollar falling makes a whole lot more sense to me now.

Can tax cuts, push the markets a bit higher? Sure, but as we know corporate tax cuts from 35% to 15% or whatever they come up with only means something like $70 billion, while cuts are forecasted to be around $150 to $300 plus billion to people who spend 100% of their income. Versus Corporations who have no need to spend that money into circulation.

Remember big money is not stupid, they understand MMT. They are not going to come out and tell you what they know! They will keep giving you the same old song and dance about deficits and the debt.They fully understand that deficits drive the economy, savings, and asset prices! if they didn’t! Markets would have never tripled since 2009 in a straight line when we had 10% deficits and everyone sat there claiming the FED was buying u the market and the plunge protection team and manipulation and all that silly caveman Bullschitt!

With that in mind, I am more convinced we are very, very close to a top. I will hold my small Short position in SPX till I get paid WELL! might have to fight trough some pain, but that’s ok my position is small.