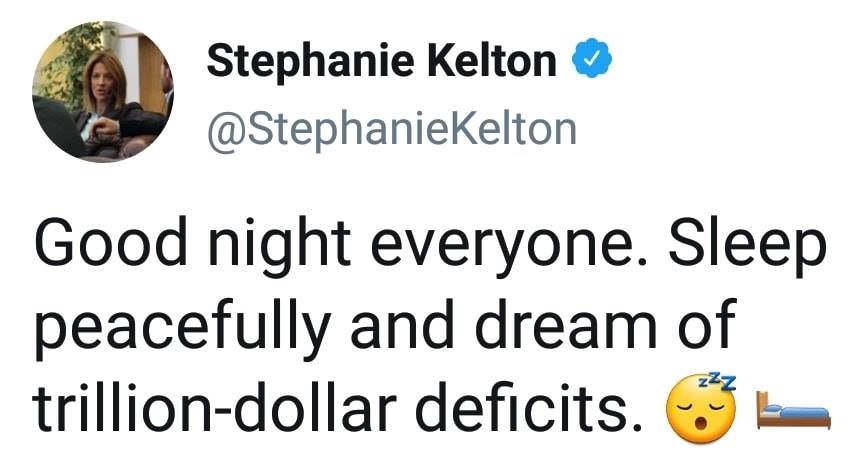 The way these scam artists convince people with their voodoo economics is by finding people who accept a few basic ideas inherently.

1. We don’t have an economic problem other than a Labor Shortage. We have and continue to break economic records. Longest job expansion, soon Longest economic expansion, JOLTS < 1 meaning more jobs than people looking for jobs, Weekly unemployment claims to the labor force, etc..

2. Capitalism has created the greatest economy in the history of mankind. $150 trillion in assets. If we had an economic problem and capitalism did not work, we would not be talking about handing out freebies to all.

3. If the mainstream economist were all idiots none of the above would have been possible. 5% of the Global population producing 25% of global GDP with the highest stand of living out of any economy with a population of 330 million or more. Thus to say we have an economic problem economist are all lost and capitalism doesn’t work is factually wrong!

4. Deficits are a great tool to use in an economic downturn and have proven very effective since 1930s. But that does not mean using emergency measures as a norm to create a moral hazard with endless deficits is a fix all solution. We have become the Greatest economy in the history of mankind with minimal deficits. Inequality only became a problem after we went off the Gold standard when deficits increased substantially. Thus to say we will collapse without endless trillions upon trillions in savings for the top 5% is a flat out lie.

5. Using the poor as a middle man to funnel trillions to the top 5% by using the word “Job” is yet another lie. A job is either work to produce a profit or work to serve Gov’t who’s function is to support the private sector. Not to print and hand out free money to anyone willing and able to punch a clock in and out like a monkey jumping through hoops. That is not a job. Anyone who has a job knows what a job is and what isn’t.

This is not to be mistaken with social economic stabilizers already in place that could be expanded and mostly paid for via wealth redistribution, taxes or other means we have outlined in #PUREMMT that require minimal deficit increases.