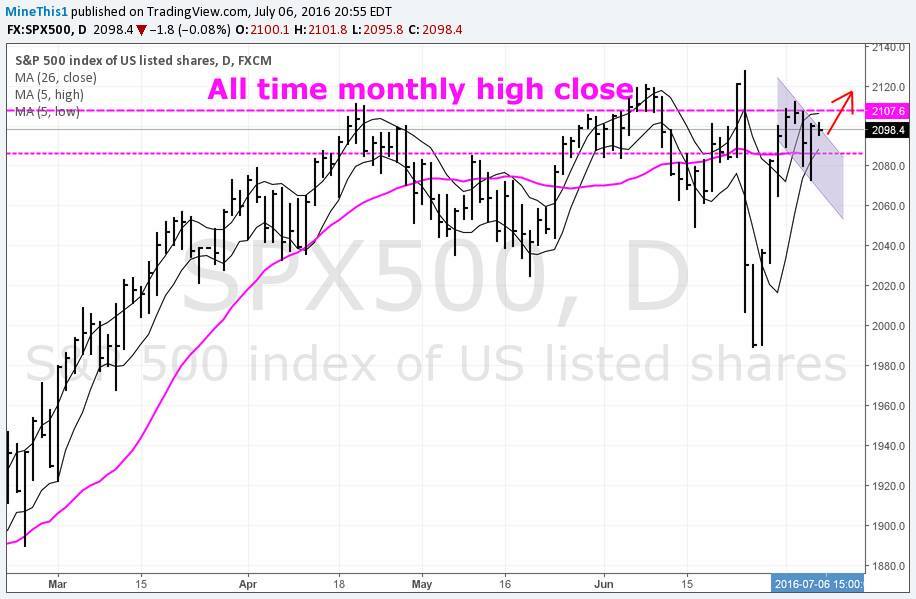 Macro analysis of the markets is an essential part of investing (buy and hold). Examining what price has done over time, gives you an important clue as to what strategy should be best applied. Cash, trading (in and out ie. buy 3, 5, 8% pull backs), buy and hold, short and hold.
While MMT gives us the fundamental macro economic understanding. Charting gives us the technical signals. As I have said over and over again.
As you all know by now I am a big fan of what I call bare knuckle charting. Twice a month I go through my ritual of looking at vanilla charts on a weekly and monthly time frames. A reset, blank canvas if you will, to see what is working and what is not.

Some of you who have been here from the beginning may recall some of my early work (Chart 1) where I talked about the 600 day move. I equated the recent market action at the time to 2012 when it took roughly 600 days before the market pushed higher. I analysed price and time to conclude that a move was coming one way or another. I even made a video about it back then on YouTube. As we all know today the analysis was correct and we punched higher. The importance of me pointing this out, is to show you the validity to TIME analysis. It is extremely important. Macro charts (weekly monthly, yearly) eliminate the degenerate gambler effect you get on smaller time frames for the most part. Thus the analysis is much reliable and gives you prospective where we are in the cycle. Up, down, flat. I have said for quite a while we are in a flat market! Some of you looked at me like I was crazy. because you were not looking at the markets through the correct lenses.

Chart 2 shows you a roughly 3% range near the top that started Nov. 2014 till Aug. 2016, about 595 days where the market went nowhere. FLAT! As a buy and hold investor, it was a complete waste of time while exposing your capital to risk with no reward. During that time, longer term buy and hold investors got the schitt scared out of them having to absorb a -12 and -15% declines. Which is why I said back when I first started QMMT portfolio on youtube, it was hard to build a portfolio at the time. The market was going nowhere and kept pulling back near highs. Buy and hold was not the best strategy at the time. For that reason I switched to a more trading style in FOREX and CFDs. We bought pull backs and sold rallies numerous times capturing an average return per trade of +4%.

The third chart measures the move since the 600 day analysis ended from Aug. 2016 to the present or 182 days for a 7% move up. If you really want to get technical the 7% move occurred in 56 days. Now ask yourself. What is the ROI for the last 2.1 years excluding dividends and inflation? Less then 3.5%. Hardly a raging bull market! As some retard, who is no longer with us, suggested in the past. 😛 I remind you, that two -12 and -15% declines had to be absorbed to produce a 3.5% ROI per year. Our ROI in the SPX fared far better buying dips, selling or even shorting rallies rather than buy and hold approach. Yielding an avg 4% per trade numerous times. Net stopped out positions on the short side. This obviously excludes other trades such as the flash crash GBP, which I don’t think I have to mention. So do say “OMG! We missed out on a 7% move higher in the market is a loss’, is simply not true! Because we made 16% buying dips since July and far more in the previous 2 year. Peaking and choosing price moves after the fact is a clear sign of a piker who doesn’t understand what the hell he is doing.

Conclusion, You can only know where we are in the cycle of the market and what strategy to apply, is by doing macro charting analysis of price and time. It is as simple as that and not rocket science. (If you have a basic understanding of technical analysis)

As I have said recently, we are in the final push higher at this point. We are in the last wave up in a 5 wave pattern. The SPX has the potential in the next 280 days or so to climb an additional 11% from here. It doesn’t have to go there before heading south, I said POTENTIALLY. The 5th wave is usually the smallest wave and 3rd the largest. That means we are near a top. While I am bullish on the break out, we will have pull backs, it won’t go in a straight shot. BUT! Since we know the market can turn at any moment and head down in a meaningful way. Exposure to the long side should be greatly reduced. We are nowhere near 2012 with high deficits and a much healthier Global economy to over simplify MMT aspect of analysis.

I hope this has helped you. Don’t forget to donate. This is all free.