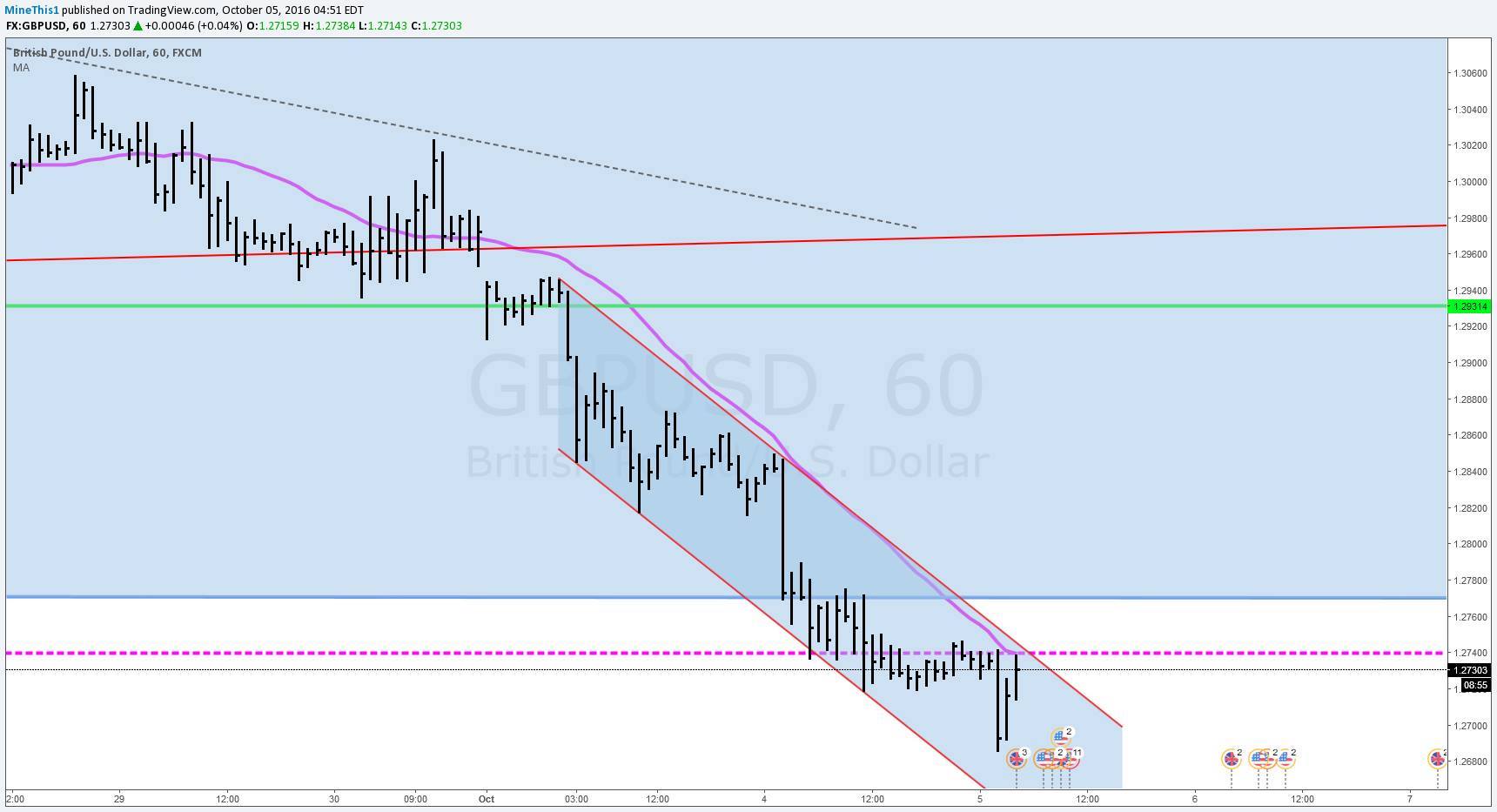 Sterling has broken out of the channel. This is good, but I would have liked to see it move to at least the 127.85 area and back in to the channel and hold. Never the less it should stop the panic selling. Now it will be harder for shorts to put on a position without being rewarded within hours and offer them comfort and reward. Now they will start to stress and cover their position without reward if they don’t get paid. Eventually the one’s who are short will start slowly covering and push it higher. There is a good possibility before that that the bottoming tail of sorts will be retested. Therefor I will place a buy down there good till cancel just in case. Furthermore, the $GBPJPY has held up fairly good during all this “HARD BREXIT” Nonsense. It is up against a descending trend line near a round number of 1.32 I will do something you guys have not see me do before but know that I do occasionally and that s trade around a position but this time hedge it. I will short one of my 2 positions in $GBPJPY at 1.32 and remain net long. Now this is a complicated trade. I flat out bought wrong. I really thought Japanese would have the little baby balls to admit their policies were all wrong and after review would man up and do the right thing. They didn’t I paid for it. Simultaneously I also wanted to get away form the dollar while still buying the best currency out GBP while shorting the worse one out there by my estimation. Having said that, I still believe the JPY sucks ass! We have seen some evidence of that lately, USDJPY is up to 103.52 GBPJPY up 132 as mentioned. Only reason I didn;t buy the USDJPY again is due to the fact that I have drank many bottles of extremely expensive wine in it’s honor. I didn’t want to go back to that winery and get straight up FUCKED! I seen that movie one too many times. I don’t need to be taught that lesson yet again. Gold has a special place in my heart, best left for another post.

$EURUSD Despite the news on QE. ZERO FUCKS Given by me. I still think the dollar will outperform the schitty EUR. Private money creation is flat, Deficit is offsetting Oil CAPEX, to add another little fact to the MMT bathtub economy model, personal savings has been rising. Which sucks money out of circulation and drains water out of the bathtub. Which we haven’t talked about much.

To sum it all up. USD kicking ass all over the place, JPY sucks donkey …. GBP is stabilizing but might need a bit more time thus my skepticism leads me to hedge a tiny, tiny bit. Not to mention I went to 11.5% of my margin used and wish to reduce it to under 10%. Despite all the fuckery and psych plays going on, I am still up 12% for the year at $560. Sucks after being up 60% but I am not worried that will get back there soon enough and exceed it handily. Despite my limitation with such a small portfolio.