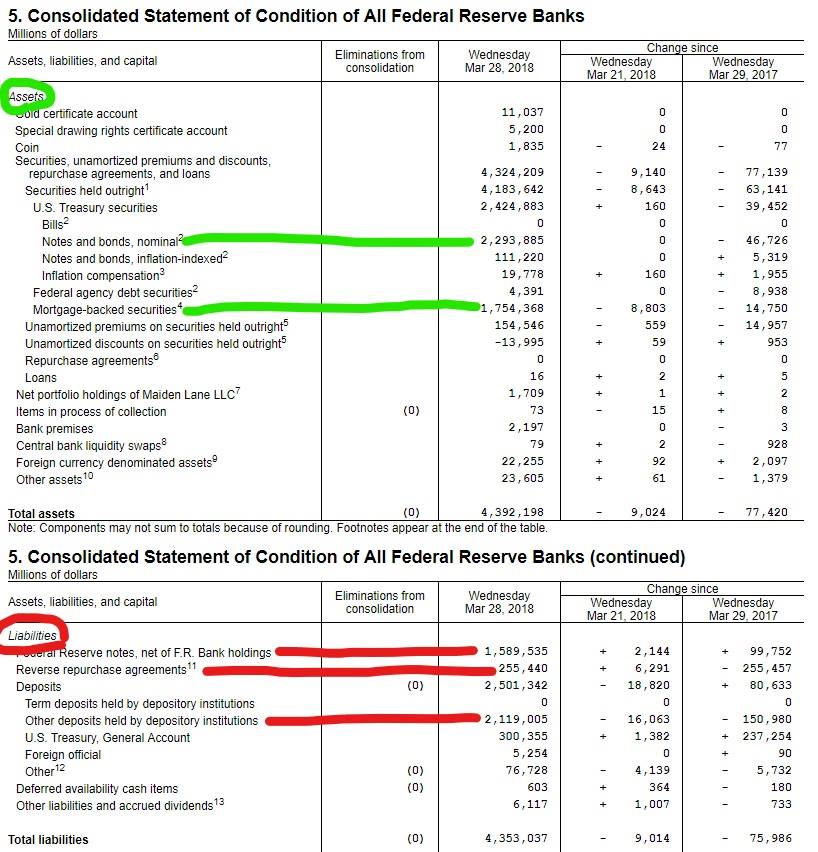 Going back to the start of the Large Scale Asset Purchase (LSAP) program right after the Lehman bankruptcy on September 15, 2008, the reason why those bond ‘kings’ and hedge fund ‘stars’ predicted that LSAP (‘quantitative easing’, ‘QE’, ‘QEII’, ‘III’, etc.), would cause massive hyperinflation and sky-high interest rates were so wrong, was because as we (hopefully) now know, there’s a difference between the newly ‘printed’ dollars that finance federal gov’t deficit spending (that add net financial assets into the banking system); and the newly ‘printed’ dollars that financed the Fed’s LSAP (that do not add any net financial assets to the banking system).

The reason why the Fed’s LSAP was not an increase of dollars into the banking system; why it had nothing to do with the money supply at all; why it had no inflationary bias whatsoever; was simple: The Fed was only SWAPPING newly ‘printed’ dollars (a.k.a. reserves) going into the monetary base (not part of the money supply), for the exact same amount of bonds (also not part of the money supply), that were ‘unprinted’ out from the secondary bond market. If you just understood that, then consider yourself ahead of 98% of the population, ahead of Nobel-laureate economists, ahead of all policymakers, and especially ahead of the mainstream media Very Smart People constantly barking fake ‘economic’ news and nonsensical (read: ideological) narratives over the airwaves using outdated, gold-standard-era mentality. The Fed is presently sitting on approx. $4T of assets bought during LSAP on their balance sheet. Also on that balance sheet are the same amount of liabilities that were created by the Fed to finance the purchase of all those Treasury and mortgage-backed securities. There are two scenarios where those Fed liabilities will be reduced.

In the first scenario, which the Fed has announced it is not going to do, a bank, (like during any Open Market Operations done pre-LSAP), forcibly purchases (is ‘assigned’) bonds presently impounded at the Fed that were bought during LSAP. In other words, the Fed would do the exact opposite of what the Fed did during LSAP (the Fed would ‘unwind’ the initial trade by ‘unprinting’ reserves and ‘printing’ those bonds held on their balance sheet back into the secondary market). Those bonds sold to the banks would be paid for by that bank’s reserves held at the Fed (meaning the Fed’s liability balance of reserves are reduced). This has not happened, nor will it ever, unless the Fed decides to more aggressively ‘unprint’ reserves and simultaneously dump bonds on Wall Street. The Fed would only do this in the unlikely event that there is a sudden, unexpected US economic boom that is so strong that the Fed wants to ‘hit the brake’ and drive both short & long term interest rates higher.

Note: Fed liabilities also include cash currency in circulation. Reserves are reduced and converted to cash currency when banks in aggregate reduce their reserves at the Fed only to the extent that they initiate new lending and the public demands more physical cash currency that flow into the economy as new banknotes. However, those dollar bills, those ‘federal reserve notes’ (FRNs) are still liabilities of the Fed so that change in the composition from reserves to dollars doesn’t change the total amount of Fed liabilities.

As of the end of March 2018 (the end of Q2 of federal gov’t FY2018), as the Fed’s balance sheet reduction continues, most of the Fed’s assets are those $4T in U.S. Treasury bonds and Mortgage-Backed Securities bonds bought during LSAP. The other side of the Fed’s balance sheet, most of the Fed’s liabilities include $2.119T of formal bank reserves of commercial banks (both required & excess reserves held by depository institutions) earning 1.75%; $0.255T of non-formal bank reserves of all the rest of the financial institutions (overnight reverse repurchase agreements) earning 1.50%; and $1.589T cash dollars in circulation (Federal Reserve Notes outstanding).