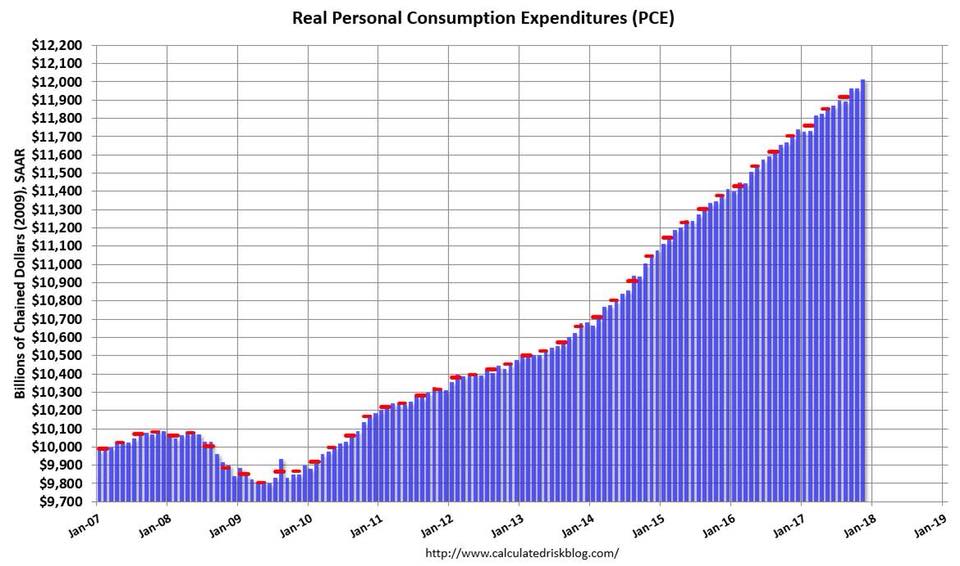 Including challenging rhetoric which has no basis in supportable facts. I grow weary of arguing myth and mistakes born of misinterpretation of the data, often manufactured by social engineers catering to partisan division.

The economy is humming right along. Feel free to disagree. I will ask for your proof. Not some nebulous meanderings of your mind. Or worse, from someone else’s mind who’s convinced you to believe their interpretation. Show me your facts. The data from which you’ve reached the conclusion the US economy will soon collapse. Some will point to the December jobs report which came in at 148K, quite a bit lower than the projected 190K. I will ask you why that predicts eminent collapse. Obama created 2.2m jobs in his first year. Trump 2.1m. What was the unemployment rate when Obama took office? In other words, how many people were looking for work, first year to first year? Apples to apples?

I told a conservative friend that if they create too many jobs it would trigger unemployment. Wish I had a picture of the look on his face. “Are you insane?”, pretty much covers it. Lmao. A year ago I would have treated that statement in a similar fashion. So let me ask you this: if the economy is at full employment, who will fill those new jobs? How bout this: what does the current power structure feel is full employment and where do we stand? Finally: so who fills those jobs? We’re at 4.1% unemployment, the lowest number since 2001. This was shortly past the Clinton budget balancing act which slowed down the economy. Then Bush implemented his tax cuts which put further downward pressure on production because savers save, they don’t create jobs. Especially in the face of what they consider full employment. Clinton’s banking deregulation created a private debt instability which collapsed the housing market and though it took nearly a decade, the jobs death spiral began. By then the savers were hoarding out of fear. They haven’t stopped. Do you think Capital isn’t paying attention? Sure they are. They’re the power behind deregulating banking again. Unemployment is low, the personal debt to disposable income ratio is the lowest it’s been in quite some time, and the Fed has a new stabilization toy. Interest on Reserve. Rather than defend a target rate against the bond raiders, the Fed sets the ceiling on rates by what they pay on reserve. Why would anyone pay 3% on the open market if they can buy direct from the federal govt at 1.5%? Bond raiding can no longer corrupt the marketplace. Currency volume alone doesn’t destabilize an economy as evidenced by QE. There must be a production component. However, the cost of creating currency affects prices across the marketplace. I’ve stated, ad nauseam, that there is no free market. The federal govt sets the baseline for all goods and services. Not by paying $50 for a $20 toilet seat but by the cost of administering the money supply. Let’s say your take home pay is $3500/mo. Your bills total $2000. If the price of your bills increases by $500 and your pay remains the same, you have less disposable income. On the aggregate this is a devastating shift which cuts demand. When the Fed raises the rate 3 times in one fiscal year they’re slowing down the economy by increasing prices. They’re inflating the economy. It appears they’re inflating the currency but they are not. They are inflating the stock of product. You can buy less. One final set of metrics and I’ll tie this all together. There are 6.6m jobs available and 6.57m unemployed. Our “underperforming” month of Dec at 148,000 new jobs created saw population expansion of 85,000. Granted, an evolving workplace literally creates job class extinction and creation, which accounts for a good chunk of that 63,000 discrepancy, but not all. Our economy is literally creating more jobs than new workers. We are very near full employment, if not there. 30,000 is not a statistically significant number against hundreds of millions employed. Sorry if this hurts your butt. Just sayin the data doesn’t support the doom and gloom narrative. We have a labor wage disparity issue, which is a different animal.

Ask Bush. I call it the jobs death spiral. Is it more complex? You bet. I’m already writing a War and Peace OP just trying to explain how you can create too many jobs. The short answer is production demand, but that won’t satisfy an intelligent mind which hasn’t experienced exposure to areas I study. Bottom line is that the Trump tax cuts will do little in the functional economy, imo, because we’re right where Capital wants us. Maybe a tad too hot, if anything. They won’t create a bunch of jobs because there’s no demand. All they need do is maintain current levels and most importantly, maintain price stability. Look at the data, ignore the partisan politicking hype. Both sides are feeding you a line of crap the data doesn’t support. No doom and gloom and no massive jobs creation initiative.

Btw, in the event they screw this up like they did last time, even with total control over the cost of money creation (price stability), we can demand a fix which benefits Labor first. Fiscal deficit spending. Our federal govt can create demand as long as there are unemployed workers willing to earn a living. The wool over our eyes is gone. There’s a large enough sector of money literates busy spreading the word that I feel confidant the next time will be different. Just don’t expect next time to be tomorrow. Or next year. Or this election cycle.